Amanda wasn’t able to make it to G-Fest this year, so she did the next best thing: Went to check out the “Godzilla at the Museum” exhibit in Nagoya! Here’s her report: 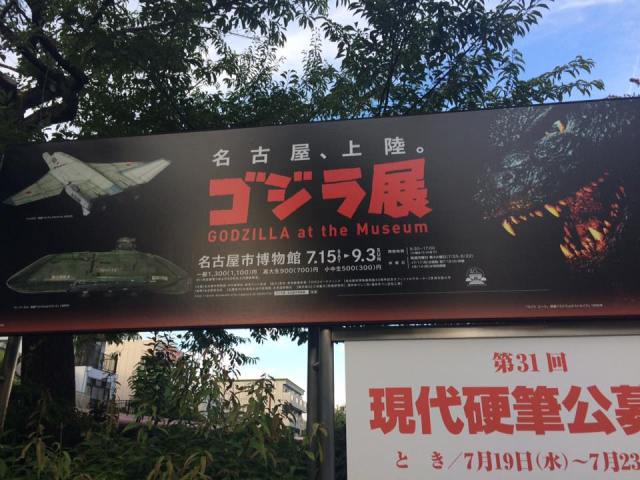 It took me about an hour and a half to get through the entire exhibition.  It was a lot larger than the one in Hiroshima that Kevin and I went to last year.

The exhibit began with the Godzilla suit from Godzilla vs Destroyah, photos of storyboards from the original Godzilla film with drawings by Akira Watanabe, a production draft for the mysterious “G Sakuhin,” an oxygen destroyer, and a diving helmet from the original film.

Then, there were an incredible amount of original drawings for Godzilla: Tokyo S.O.S., including the designs for the scarred Godzilla, Mechagodzilla, and Mothra drawn by Shinji Nishikawa. There were also a lot of the original hand-drawn set plans for the film done by Toshio Miike.  Miike doesn’t even have an English Wikipedia page, which is a travesty, because he’s been working on tokusatsu and monster movies since the mid-eighties, most recently working as the special effects production designer for Shin Gojira. His set drawings for Tokyo S.O.S. included Mechagodzilla’s dock, the National Diet Building, Tokyo Tower, and the Mothra egg set at the crater, complete with hilarious hand puppets wielded by people standing under the set for the egg-hatching scene.

The Nagoya City Museum actually hosted Miike for a set-building workshop in August as part of the exhibit.  There was also a talk by Shinji Higuchi in July, but unfortunately I wasn’t able to get tickets.

Next, there were a ton of gorgeous drawings by Yasuyuki Inoue.  Inoue was first recruited by Toho in 1954 to work on the original Godzilla and later became the head of Toho’s Special Effects Art Department. He was involved in over 160 different projects over 3 decades and was regarded as Eiji Tsuburaya’s right hand, although he doesn’t have quite the same name recognition.

Works by Inoue on display at the exhibit included drawings of the monsters in Gorath (1962) and Atragon (1963), Mothra’s island and King Ghidorah’s egg set in Ghidorah the Three-Headed Monster (1964), the North Pole set and King Kong’s island in King Kong Escapes (1967), the jungle, Godzilla, and Kumonga in Son of Godzilla (1967), Monsterland and the heliport in Destroy All Monsters (1968), and color designs of Hedorah, as well as drawings from The Mysterians (1957), Battle in Outer Space (1959), Latitude Zero (1969), and the war film The Battle of the Japan Sea (1969). 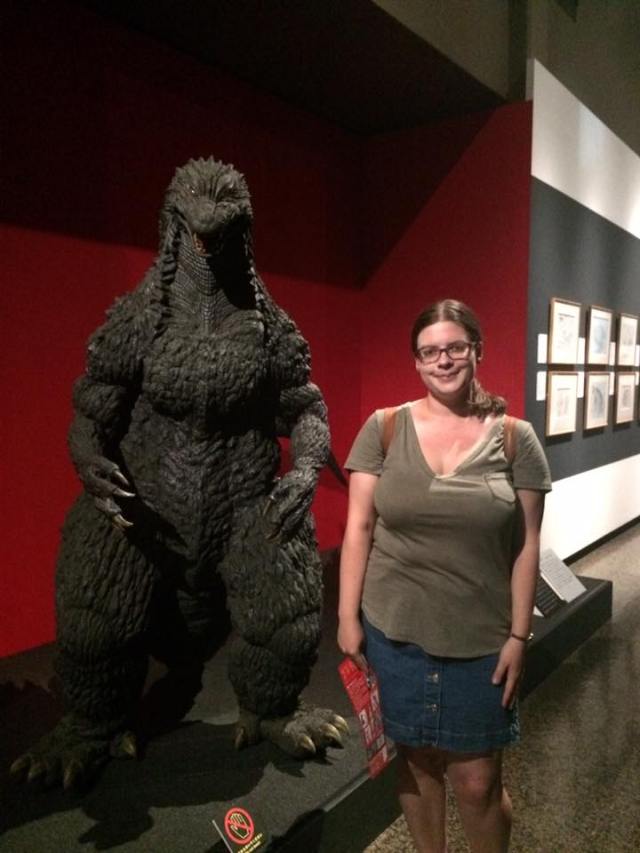 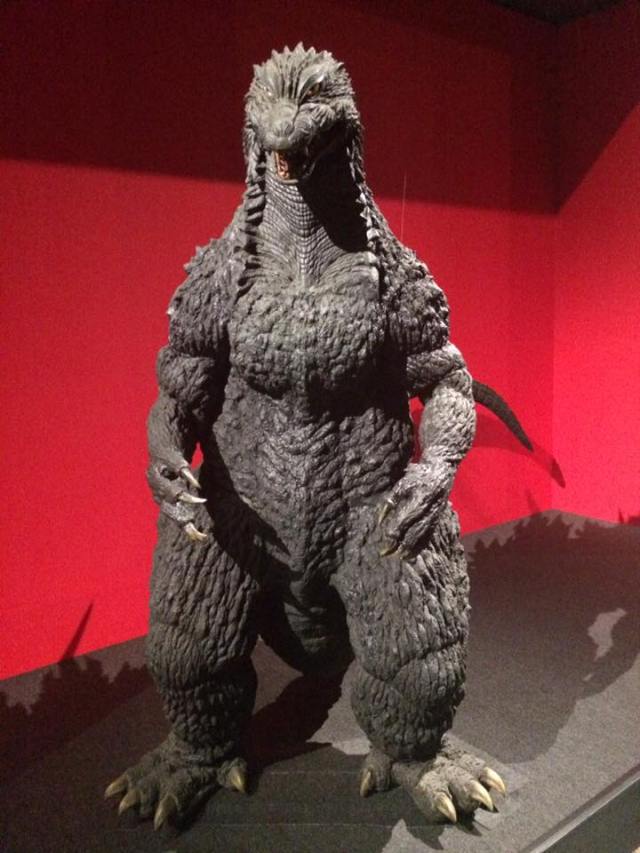 Also on display nearby were Akira Watanabe’s designs of Magma and Baragon in Gorath and Frankenstein Conquers the World (1965), a giant Godzilla leg apparently used in Invasion of Astro-Monster (1965), Return of Godzilla (1984), and Godzilla, Mothra and King Ghidorah: Giant Monsters All-Out Attack (2001), models of the Type 90 Maser Cannon and Shirasagi (AC-3 White Heron) that appeared in Godzilla x Mechagodzilla (2002) and Godzilla: Tokyo S.O.S. (2003), a model of the Wadatsumi submarine from Godzilla vs. Biollante (1989), and a model of the nuclear submarine in Return of Godzilla (1984), Godzilla vs. King Ghidorah (1991), and Rebirth of Mothra II (1997).  There were also photographs of the story boards for Godzilla Raids Again (1955), The Mysterians, Mothra (1961), and Rodan (1956).

Next up was a giant animatronic bust of Shin Godzilla and the model of the destroyed Tokyo Station used in the movie.  I got lots of pictures of the Tokyo Station model because it was labeled as ok for photography, but sadly I didn’t get any pictures of the animatronic bust.  I really wish in retrospect that I had ignored the guards and signs forbidding pictures and just gone for it, because it was pretty freaking cool.  I’ve heard from Kevin that there may be some pictures of that floating around on the internet, so I definitely recommend checking it out. 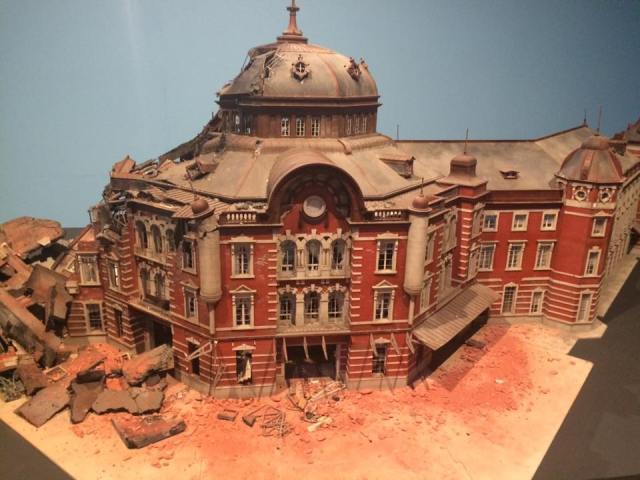 Other highlights of the exhibit included some neat Biollante illustrations by Shinji Nishikawa, a comically adorable Moguera maquette from Godzilla vs. Space Godzilla, a wide array of sculptures by Yuji Sakai, and of course, the kaiju suits on display.  This exhibit featured the Gigan suit from Final Wars, the Ghidorah suit from All Out Attack, and the Godzilla suit from All Out Attack with its really cool dead-looking eyes.  There was also a large Mothra marionette hanging from the ceiling that was used in Rebirth of Mothra 1 and 2.

There were also a lot of really cool kaiju-themed paintings by Yoshiyuki Takani, Noriyoshi Orai, Yuji Kaida, and Yasushi Torisawa.  My favorite from Noriyoshi Orai was the original painting for the Godzilla vs. Biollante movie poster, and I also really enjoyed a Hedorah painting by Yashushi Torisawa called 融合し巨大化するへドラ(Hedorah fusing and becoming giant).

At the end of the exhibit, there was a spot to have your picture taken with Final Wars Godzilla attacking Nagoya castle, which I naturally did.  There was also a gift shop!  Unfortunately, they only accepted cash and I was running a bit short, so there was a limit to how much I could purchase.  For Kevin, I picked up the exhibit-exclusive book, which includes a lot of the set drawings and behind the scenes photographs from Tokyo SOS that were on display, and for myself I picked up a nifty Godzilla notebook and pen. 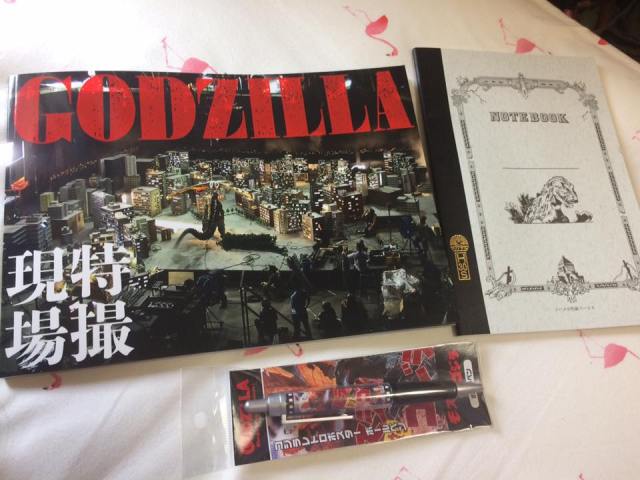 The exhibit was a lot of fun! I recommend checking things like this out even if you don’t speak or read Japanese, because there was some English signage and a lot of it can still be enjoyed regardless.

My only regret is that I didn’t manage to enter the ticket lottery to see Shinji Higuchi speak at the exhibit. I did visit on the same day that he was there, but wasn’t fortunate enough to run into him. Anyways, I hope you all enjoy this write-up! Happy holidays :)